The arrest of two Palghar girls for publishing a “hurtful” Facebook post about last Sunday’s bandh has sparked a nationwide debate on the misuse of internet laws in India.

Indeed, this is not the first case of its kind, as just last month, a Pondicherry businessman was arrested for a tweet criticising P Chidambaram’s son. Earlier in the year cartoonist Aseem Trivedi’s drawing got him arrested on charges of sedition.

Cases like these make one wonder how much of a democracy our beloved nation really is. On the scale of controversial, Shaheen Dhada’s post, which you can read below, can at best be classified as tepid. In the deluge of posts, tweets and mentions that were published that day, many of which were a lot more outspoken in their criticism of the clampdown, this was the one unfortunate one that caught the friendly neighbourhood moral police’s eye. 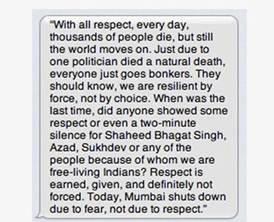 News of the girls’ arrest understandably gained widespread attention. Right from Kapil Sibal who bemoaned the misuse of Section 66A (of the IT Act, which perversely, he had been instrumental in passing), to politicians like Milind Deora  and Nitin Raut – the social media community was baying for blood by the end of the day, and well into the week that followed. 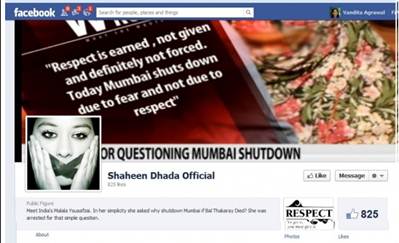 Shaheen’s post was a catalyst for those who had been playing it low key in the meanwhile. The smatter of posts extolling Bal Thackeray’s every virtue was wiped out by an outpouring of support for the girls by netizens from all over India. 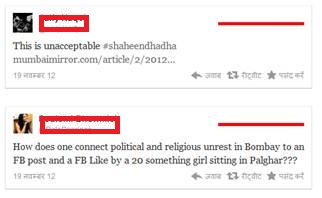 In its aftermath, the Facebook post issue has raised some serious concerns for the online community, not only regarding the frivolous way in which the IT Act was implemented in this case, but also regarding the more fundamental questions about freedom of speech and expression.

Is it really of primordial importance, in a country that is facing far more severe and pressing problems like poverty and corruption, to agonize over one individual’s far from controversial personal opinion on a social media platform? If something as frivolous as a Facebook like can cause this knee-jerk reaction amongst our law makers and enforcers, where does that leave us?

Time Magazine summed it up as “The arrests reflect the wider wariness with which Indian authorities look at social media, even at the cost of curbing freedom of expression.” And the story that should have been grabbing eyeballs at the time –the one in which Shiv Sainiks vandalised the girl’s relative’s clinic in response to her post – was almost totally lost in the indignation that followed.

Now what remains to be seen is what the authorities will make of the issue. As of now, the inquiry into the police’s rash actions has begun, and 9 men have been arrested in relation to the destruction of the clinic.

Shaheen Dhada may have been forced to apologize in view of the unfortunate circumstances that surrounded her innocent post, but this case has definitely left a sour taste in the mouth of the purveyors of free expression, and a definite question as to the applicability of the draconian laws that currently govern India Online.